Trust (Children of Chiron Series Vol 1)
Will be released tomorrow August 31 2017
Get it FREE now here
And please leave a review here.
Thank you everyone!
Want to know more? See what people are saying about it and read the book synopsis. (Read below)
Helen Pryke Domi
August 29 2017
This is a profoundly touching story of centaurs meeting humans for the first time, and the problems that follow, that brings to mind the conflict between natives and Europeans during the centuries. Two male centaurs must travel to Earth to save a pregnant female, as their race is dying out and only a few are left. But they find themselves persecuted by the humans and have to flee for their lives. They kidnap a human woman who has just given birth to save the baby centaur they have to cut from its dying mother’s womb. One of the centaurs is captured, leaving the other, Ieang, responsible for the woman and baby centaur’s lives. This is the story of how the woman and the centaur gradually learn about each other’s cultures, lives and languages, and of how a deep respect grows between the two of them. While one race reveres females and almost worships them, the other considers them lesser beings, mere property to be treated as they see fit, and this creates considerable problems. There is a spiritual thread throughout the book that makes the reader think about the differences between our modern world and that of the ancient tribes, and how difficult it is for one to adapt to the other.
I really liked the story, it was both magical and horrific, with the abuse and the way the humans treated the centaurs. I gave it 4 stars because it was a bit confusing in places – with a bit of editing and tidying up, it will be a great book!
John McNeil
August 11 1017
My review of Tabitha darling’s TRUST   Children of Chiron Volume 1
The old phrase, “We were from different worlds!” is oh-so-apropos for this tale which follows the exploits of the last centaurs as they struggle for their very existence. A small group of them are sent to modern-day Earth…where they encounter a rather hostile reception from a citizenry who seem inclined to shoot and/or capture…and ask questions later. One pregnant centaur is killed in the melee, and two male centaurs, Iaeng and Tiang deliver her child. They make good their escape from the battle with the humans, but have to kidnap a human woman to nurse the infant. The two centaurs soon become separated, and from this point the story revolves around Iaeng as he must struggle to survive on in an alien world he barely comprehends. Of course, having a hostage in tow, and caring for an infant when he has almost no knowledge of how to care for one only compound his problems. Over time, a bond of trust and understanding begins to develop between the centaur and human woman. He finds her and her culture strange and bewildering…and she struggles in like manner with him and his. When she rejoins her family, he is befriended by some of them, and the story of how they attempt to understand one another continues.
I found the examination of the cultural and religious difference to be very good and it delved into many areas of thought, reflection, purpose of life, and inner conflicts in an intelligent manner. The characters weren’t merely two-dimensional stereotypes and they helped carry the message of the book very well.
I liked this book very much, and I certainly recommend it!
J P Jamin
August 6 2017
Review of Trust Children of Chiron Volume 1
A gorgeously styled fantasy in which a dying race of Centaurs sees a hope of survival in their encounter with humans. The novel is compelling and at times provocative in its scenes of trans-species maternal bonding, and the conflict between amity and mistrust that resonates powerfully in modern tribal politics and cultural warfare. Most fascinating is the theme of shamanic spirituality and the overlay of telepathy, creating an extrasensory world map as each group senses the presence of the others’ thoughts. If you like Jane M. Auel, you’ll love Tabitha Darling!
Synopsis
When centaurs return to Earth, they are dying. In the hopes that humanity can help, war breaks out instead. The last infant must be saved! As one centaur, Ieang struggles to keep the infant girl alive, he finds himself not only  trapped on this planet but on the run. Both are caught in the middle. Desperate, he and his companion capture one of the enemy humans, but will she will care for the infant?! Every day the baby lives is precious! 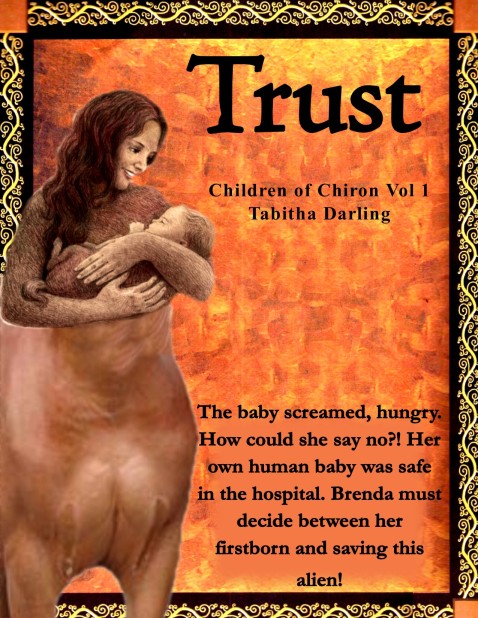